swiss replica watches
Home › Joe Love › An army of one: The failure of the us vs them mentality. 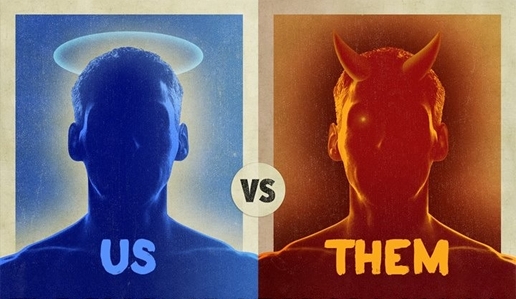 We all like to have our opinions and many of us fight to see those opinions help change the world for the better. Many of us default back to our instincts of fights, arguments, and debate. In order to have a fight, argument, or debate, there has to he an “other side”– a 2nd party or group; someone to oppose. When we’re not on the battlefield looking at our enemy, things become more subjective.

Who is actually on the “other side” of our argument on social media? We may know a few names, however, we often resort to generalizations or labels to simplify things in our posts. You’ve seen it every day: Democrats vs Republicans, North vs South, majority vs minority. We’ve created dividing lines that may be grossly inaccurate. Many of us realize this, so we tend to cull the field of who represents our allies.

Among Republicans, there is a term that’s thrown around often: “RINO”. RINO stands for Republican In Name Only. In practice, this term is usually used by a Republican, to label another Republican with whom they disagree. This form of labeling is, more often than not. counter productive. Republicans created a party to rally around a particular set of ideals (their platform), and most agree on large issues. You may agree on low taxes, small government, local control, and a million other major issues, but one small difference of understanding can easily result in someone being labeled a RINO. For Republicans, once you label someone a RINO, they’re no longer part of “US”.. they’re part of “Them”. A former ally is now an enemy.

I’m reminded of the old Baptist joke where two guys meet. One guy asks the other
“Do you believe in God”?
“Yes!”
“Christian or Jew?”
“Christian.”
“Protestant or Catholic?”
“Protestant”
“Baptist, Methodist or Presbyterian?
“Baptist”
“Northern Baptist or Southern Baptist?”
“Northern Conservative Baptist, Great Lakes region”
“Council of 1879 or 1912?”
“1912”
“YOU HEATHEN!”

One strategy of warfare is to divide and conquer. When we distance ourselves from each other based on our differences, we’re dividing our team into smaller and smaller sects, in-effect conquering ourselves. We may justify this labeling by saying “XYZ is a big issue”, but consider– Doubting Thomas and Denying Peter were both counted among the 12 disciples. Jesus knew he’d be betrayed by Judas, yet Judas was not kicked off the team.

The world is not changed by parties or labels. It’s changed through good ideas that get implemented. We work better as a team. If you desire to be effective, find common ground with as many people as possible. Whether you support public school, home school or private school, I think we can agree that we’d like the next generation to be smart and successful– that’s a huge start. We can change the world for the better, but to do so we have to be effective. Creating an army of one vs the entire world scenario is not a recipe for success. Hold true to your morals and values, but also recognize that there’s more than one way to skin a cat. Sometimes there’s middle ground and sometimes there’s not, but we’ll never find out by habitually labeling and ostracizing others.

In the marketplace of ideas, we’re better off with more ideas presented honesty. The worst of ideas is often born out of a noble goal. We’re collectively and individually better served by learning and leaning on each other rather than labeling and laughing at each other. Often times when we put that label on someone, we turn our brains off.

The “Us vs Them” concept is not entirely flawed, but we have to work hard to keep our team intact. We have to be big thinkers and quick to forgive. When we are slow to hate with a desire to love, our team grows bigger and stronger– our relationships can stand the storm of differing opinions and political strife. And through it all we’ll learn and grow smarter.We’ll become better listeners. Instead of labeling and shutting off our brains, we’ll listen and open our hearts.

We can grow a team that can take on the world.